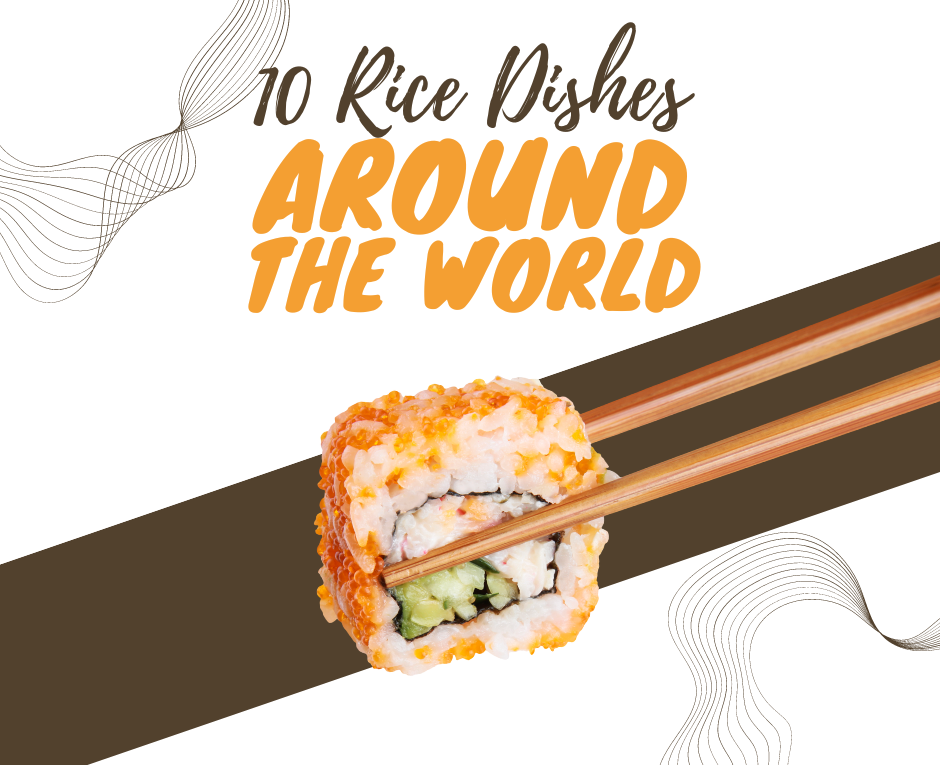 Rice is one of the most basic yet tastiest staple foods around. Present in most, if not all, cultures around the world, rice is a very versatile, healthy food that can be eaten sweet or savory, hot or cold, plain or flavored, whole or mashed, and so much more.

Let’s take a look at how different countries worldwide eat their rice!

Arroz rojo, or red rice, is a staple in Mexican cuisine. Commonly served as a side dish, it can be paired up with almost anything as it’s not only versatile but also budget-friendly. It is made by simmering rice with fresh tomato sauce, onions, and garlic. Some variations also include herbs like cilantro and mint, spicy things like fresh and dried peppers, vegetables like carrots and green beans, and toppings like eggs and fried plantains.

Bibimbap is an extremely stunning, colorful dish from South Korea. It is made with meat, vegetables, and a fried egg laid atop steaming, hot rice. The best part about bibimbap is how easily adaptable it is—you can add in any vegetables of your choice with any meat of your choice.

Once you’ve determined your ingredients, you mix it all in with a tasty bibimbap sauce that’s commonly concocted with soybean paste or red chili paste. It ties everything together to bring you a dish that checks all macronutrients!

Champorado is the only sweet dish on this list. It is made by boiling glutinous rice in water mixed with traditional dark chocolate. Served as either a meal or a snack, it is topped with lots of sugar, powdered or condensed milk, and dried fish if you’re feeling adventurous.

Jambalaya is an American rice dish that is the perfect blend of French, African, and Spanish influences. It is pure soul food—many American households have recipes for jambalaya that are passed down from generation to generation! However, jambalaya is traditionally made with either chicken or pork, sausages, seafood like shrimp and squid, vegetables like onions and bell peppers, crushed tomatoes, and of course, rice.

Like jambalaya, jollof rice is another rice dish that is traditionally made with tomatoes. It also consists of vegetables such as onion, peppers, garlic, and ginger; meats like chicken, beef, or fish; spices like curry powder, thyme, and nutmeg; toppings like fried plantains and cucumbers. It is regarded as the most famous and prominent African dish worldwide!

Nasi goreng is popular fried rice found in Indonesia and Malaysia. It is made by taking day-old, dried-out rice and mixing it with sweet soy sauce, shrimp paste, choice of meat, onions, and chilis. It is also commonly served with a runny, sunny-side-up egg (pop the yolk onto the rice for some extra goodness!)

Nasi goreng is an awesome way to use up any leftover rice you might have. Eat it as is or with other viands like chicken skewers, barbecued pork, or plain vegetables!

Onigiri is a Japanese rice ball that is typically molded into triangles, balls, or even hearts. It is often stuffed with fish, kelp, and pickled ingredients and wrapped tightly with seaweed. It is found in convenience stores all over the country and is the food of choice for commuters who want a quick bite to eat before heading for work.

Pelau is a famous rice dish hailing from Trinidad and Tobago in the Caribbean. Its flavor profile is multilayered—you get nuttiness from the scorched sugar and pigeon peas, spiciness from the peppers, creaminess from the coconut milk, tanginess from Worcestershire sauce and ketchup, and umami from the different meats. It all comes together when cooked with rice.

Risotto refers to a cooking method more than an actual dish. It is the most common way northern Italians cook and serve their rice. Here, rice is cooked in broth derived from meats, seafood, or veggies until it reaches a creamy consistency. Many risottos are also cooked with butter, cheese, and wine to help enhance the flavor of the broth.

There are many types of risottos for you to try. Below is one version, the Risotto ala Milanese.

Roz maamar is a rich, savory rice dish. It is cooked in a traditional clay pot and oven and loaded with butter, heavy cream, choice of protein, and clotted cream, making it extremely creamy and filling for the entire family.

In the olden days of Egypt, roz maamar was considered a peasant dish. Women would just load up the pot with the ingredients, shove it in the oven, and forget about it for an hour while they did chores. Nowadays, however, it’s considered classic comfort food in southern Egypt.