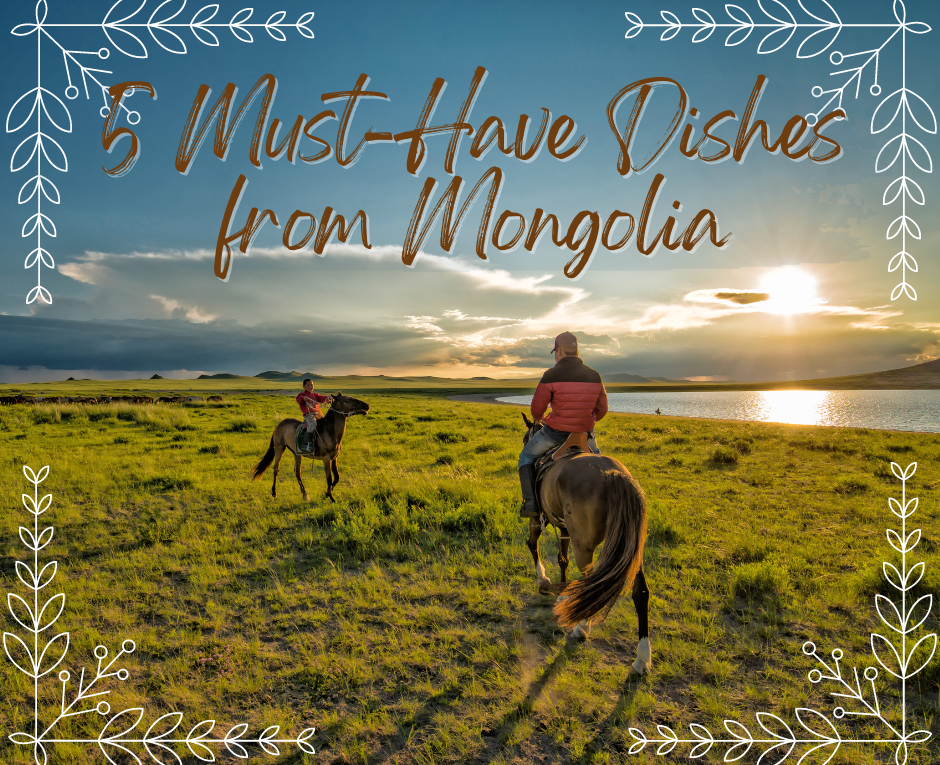 Mongolia is an Asian country located in the middle of Asia, bordering Russia on the north, China on the south, and Kazakhstan on the west. Despite being the largest landlocked country in the world, their population totals to 3.3 million, with around half of the population living in the nation’s capital, Ulaanbaatar. This makes Mongolia the most sparsely-populated country in the world, which is probably why many of their natural resources remain untouched and unaffected by urbanization.

As you will be seeing in the article below, many dishes in Mongolia rely heavily on the livestock they raise. Home to sheep, cattle, yaks, goats, chickens, horses, and more, the Mongolians make sure to take full advantage of it!

Considering how close Mongolia is to China, it comes to no surprise that Mongolia has their own version of dumpling dishes too. While Japan has their gyoza and South Korea has their mandu, Mongolia has buuz!

Buuz is a savory steamed dumpling packed with a lot of minced meat and vegetables. Preparation varies by region, so the meat chosen for the filling can either be beef, chicken, pork, or lamb. There are even variations as to what shape the dumplings are formed into.

Unlike other dumplings, the filling is actually cooked beforehand. This makes buuz all the more tender, melting in your mouth at the slightest touch.

Tsuivan is Mongolia’s version of stir-fried noodle dishes. Though the dish is believed to have originated from China, over the years, it has evolved to become uniquely Mongolian. That’s largely in part due to the way it’s cooked—everything from the noodles to the meat is fried and steamed in one large pot! The noodles are usually handmade, and the meats can range from mutton to beef to horse. It’ll all depend on the household—ask anybody how they make their tsuivan and you’re bound to hear different answers each time!

Here comes another tasty noodle dish that’s sure to satisfy any palate. Unlike the tsuivan, guriltai shul is boiled in clear mutton stock that’s good for the gut and a ton of vegetables, making it very nutritious especially during the winter time. The handmade noodles remain the same though.

Taste-wise, it’s a mix of both acidic from the yak’s milk curds and umami from the meat. It’s the perfect meal for a long day outside. With every spoonful, you can get chewy noodles, savory broth, and delicious meat!

We can’t make a list of a country’s signature dishes without including a dessert! And for the Mongolians, their favorite dessert will most likely be the boortsog, or their version of donuts.

Boortsog is made of a simple dough consisting of salt, butter, sugar, flour, and water. It’s then deep-fried in either vegetable or mutton fat, depending on accessibility and preference. Boortsog is usually covered in sugar, brushed with butter, or dipped in yogurt. Some Mongolians even like to dip their boortsog in their tea, just like you would a biscuit.

Mongolia is known for their wide array of milk, which they use in all sorts of dishes. While you’ve definitely heard of cow’s milk and goat’s milk, they’ve got sheep milk, horse milk, and even yak milk! They use these milks to make tasty treats called aaruul, which are squeaky cheese curds. They can be prepared either savory (with a bunch of herbs) or sweet (with sugar and fruit).

Unlike American cheese curds, which can be very salty, aaruul tends to be a little on the sour side.

Mongolia’s milks are known to keep their people’s teeth and bones healthy and strong. They’re awesome sources of protein, vitamins, and minerals with numerous health benefits.