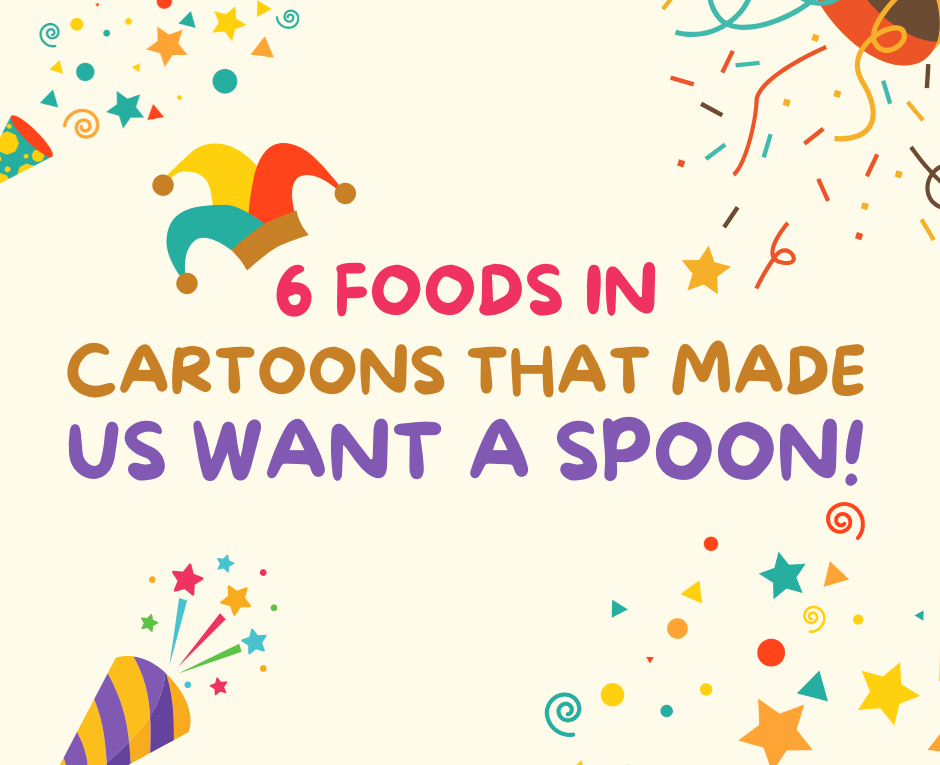 Many of us have fond memories of watching cartoons. Before school, we’d squeeze in a little bit of cartoons while gulping down our breakfasts. Once we got back home from school, we’d immediately drop our schoolbags to hop in front of the TV and watch some more!

Another thing cartoons did was influence the way we eat. A lot of them featured tasty-looking foods that made us want to take it from the screen for ourselves. In this article, we’ll be taking a look at cartoon foods that made our stomachs grumble!

Just like Plankton, many fans of Spongebob Squarepants desperately want to know what goes into the Krabby Patty recipe. While it has common burger ingredients like lettuce, cheese, and tomatoes, nobody really knows what goes into their patties and their secret sauce to make it so tasty. It must be something really special considering it looks good enough to eat even as a cartoon!

Just ask anyone who’s ever watched Spongebob Squarepants! They’d probably tell you they would have loved a bite of the Krusty Krab’s famous burger. Even grumpy old Squidward couldn’t resist a bite!

If there’s any food that Homer Simpson loves above everything else in the world, it’s donuts—specifically, pink sprinkle donuts! The beloved dimwitted character has been associated with donuts so much that Krispy Kreme even named their pink sprinkle donut (Simpson D’ohnut) after him!

And if that’s not enough, did you know that Homer changed the course of history simply for a donut? In one episode, he goes back to the past and comes back to an alternative universe where everybody in the family was rich and happy. The only downside was that Marge didn’t know what a donut was—that was enough for Homer to hop back in the time machine and change things again.

A naco is a combination of both nachos and a taco. Essentially, you take tortilla chips drenched in nacho cheese and shove it in what looks to be a soft-shell taco. While Kim Possible says it’s disgusting, Ron and his pet naked mole rat would beg to disagree. They both scarf it down much to Kim’s judgment.

Interestingly, the restaurant they’re in—Buenos Nachos—also think the naco is a good idea. They end up buying the rights to the naco and agree to give Ron $0.25 for every naco sold. Within two years, Ron had received over $99,000,000!

4. Scooby Snacks (Scooby-Doo, Where are You?)

Scooby Doo and Shaggy were the hilarious comedic duo in the Scooby Doo series. They were well-known for being great lovers of food. In almost every episode, they could be seen wolfing down a pizza or building a sandwich that was just as tall as they were.

They were also known to be scaredy-cats. Try as they might, they just weren’t as brave as their friends, Fred, Daphne, and Velma. So, in order to give them a little nudge when the mystery called for it, their friends would often offer them a Scooby Snack in exchange for their bravery.

Now, we’re not exactly sure what kind of treat a Scooby Snack was, but it must have been super delicious if Scooby and Shaggy would willingly go after monsters for one of them!

Spinach is a highly nutritious leafy green vegetable that was a regular part of Popeye the Sailor Man’s diet. He often ate a whole can of spinach when in great danger. This gave him an extra energy boost to help defeat his enemies and also escape from dangerous situations. You just know that if Popeye had his spinach on hand that there wasn’t anything he couldn’t do!

Because kids wanted to grow big and strong just like Popeye, many of them have started eating spinach too. That’s definitely one way to get your kids to eat their vegetables!

Who ever said watching too many cartoons was a bad thing?

What do you get when you have crunchy bacon and soft pancakes cooked by an adorable dog? An irresistible combination, of course! Bacon pancakes are so incredibly special that it was even honored with its own song.

Try bacon pancakes out for yourself by simply adding strips of bacon in while cooking pancakes. We think it’ll be like a reverse chocolate bar—soft and chewy on the outside while crispy on the inside!