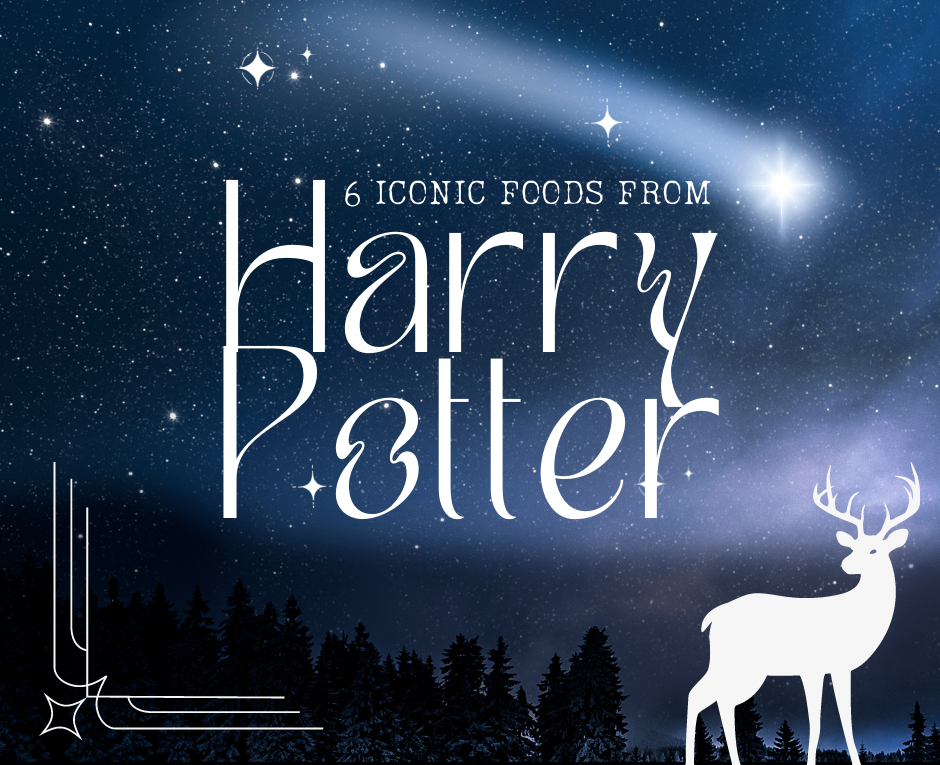 The Harry Potter series is undoubtedly one of the most influential book series of all time. Written by J.K. Rowling, these books follow the story of Harry Potter, who learns magic at the Hogwarts School of Witchcraft and Wizardry. Together with his best friends Ron Weasley and Hermione Granger, they grow up and discover the true meaning of friendship as they band together against the evil forces led by Lord Voldemort.

What makes Harry Potter stand out among the rest is the richness and vastness of the story. Rowling had written the series so well that millions of people long for the magical world to actually exist. After all, who wouldn’t want spells that could clean your house in a jiffy and charms that could make things fly? Who wouldn’t want to go to a school with moving doors and staircases or go to a village that sold all sorts of magical items? I certainly wouldn’t say no!

There was a wide array of food mentioned in the books. Some of them are staples in British cuisine, while others were created in the wizarding world! In this article, we’ll be taking a look at some of the dishes mentioned in the Harry Potter series.

Butterbeer is perhaps the most iconic food in the magical world! Described in wizardlore as “little bit like less-sickly butterscotch”, this popular beverage is a combination of butterscotch, whipped cream, vanilla, and cream soda. It can be served either ice-cold in bottles in the summer, or hot in foaming tankards for the colder seasons.

In the books, it’s implied that the drink has mild alcoholic content, which is why house elves tend to get drunk off of them. It didn’t affect humans at all, though you can easily remedy that by spiking your own recipe with vanilla vodka or butterscotch schnapps.

Chocolate by itself is already pretty dang magical, but chocolates shaped like frogs that actually hop around? That’s a tasty treat that would have you bouncing on the inside!

Chocolate Frogs are a very popular candy in the wizarding world. They’re not actually made of frogs, though, so don’t worry about that. Instead, they’re made of solid milk chocolate that melts in the mouth.

But that’s not the reason why most people love them. Every Chocolate Frog comes with a collectible card of a famous witch or wizard, and students at Hogwarts often traded cards with one another. Famous personalities included Albus Dumbledore, Merlin, and the four founders of Hogwarts.

You can actually purchase a Chocolate Frog for yourself in the Wizarding World of Harry Potter. While these don’t hop around, they come with the cool collectible card and taste just as yummy.

As many Potterheads might already know, treacle tart is Harry Potter’s favorite dessert. In fact, he loves it so much that he smells it in the presence of Amortentia, a love potion that emanates scents depending on the user’s preferences!

The real treacle tart is more of a pie than a tart. The base is made with butter, flaky pastry while the filling is made with sweet and tangy treacle, also known as golden syrup. It’s typically served warm with a generous heap of clotted cream, custard, or yogurt.

Bouillabaisse is a traditional French stew that comes from the port city Marseille, down by the Mediterranean Sea. It consists of at least three different kinds of bony fish but can also contain other seafoods like mussels, crabs, and octopus. Together with vegetables like leeks, onions, and tomatoes, the slow-simmering seafood creates a stunning broth that’ll have you reaching for a bottle of wine in no time.

Bouillabaisse makes an appearance in the Goblet of Fire. It was served to welcome French students from Beauxbatons Academy—Fleur Delacour, in particular, was very impressed by it and even asked other houses for their share of bouillabaisse.

Pumpkin juice is a sweet drink with just a hint of spice. It’s a drink that’s perfect for all seasons, which is probably why the many students of Hogwarts enjoyed drinking it. In fact, pumpkin juice is available for purchase on the Hogwarts Express and is a staple for every meal time! One can even say that it was more popular than the usual glass of orange juice.

It can be served cold over ice or warm in a mug depending on your preference.

In the books, Hagrid the Hogwarts groundskeeper was one of Harry’s dearest friends. He, Ron, and Hermione often visited him in his little hut within the castle grounds. Whenever they would visit, Hagrid would serve them a huge tray of rock cakes that the trio only pretended to enjoy as biting into them was, to put it simply, like biting into an actual rock.

Luckily, rock cakes in real life are very soft and chewy. They’re called rock cakes more on their appearance than anything else. Made with dried fruit, flour, milk, sugar, and eggs, these rock cakes boomed in popularity during World War 2 because of how cheap it was to make them. To this day, many British people enjoy them with a cup of tea.