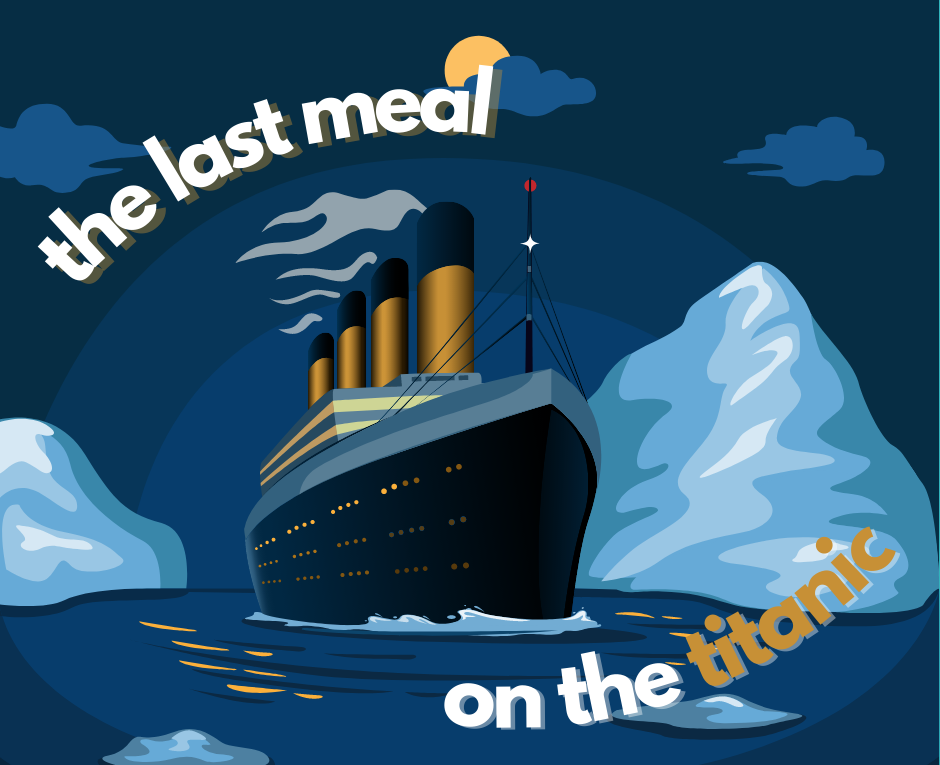 The ill-fated luxury-class ocean liner RMS Titanic may have sunk in 1912, but the aftereffects are still being felt to this day. There is just something so alluring and intriguing about the ship. Known for being the most luxurious ship of the time, the Titanic carried some of the wealthiest as well as 2,200 other passengers. On the night of April 14, the Titanic struck an iceberg on its maiden voyage, sinking the ship in the middle of the Atlantic Ocean.

As we said earlier, there were many first-class passengers on the Titanic. These include The Countess of Rothes, White Star Line’s managing director J. Bruce Ismay, Macy’s department store owner Isidor Straus, and real estate magnate John Jacob Astor IV. They were given the best rooms on the ship, the best service there is to offer, and the best dishes aboard the Titanic.

The menu for the last meal aboard the Titanic was managed to be retrieved after its sinking. You can see a glimpse of what these passengers ate below before their untimely demise.

Let’s start the first-class meal right with a platter of the most delicious oysters on a half-shell! They were a classic then and are still a classic today. They are served raw and burst delicately in the mouth when eaten. Oysters taste light, briny, and absolutely delicious especially if you have vinaigrette on them.

The Titanic also served hors d’oeuvres with the first course, but we’re not entirely sure what type of hors d’oeuvres. Experts think that canapes a l’Amiral might have been one of them since it was popular at that time. However, now we will truly never know.

The second course of the last meal aboard the Titanic was soup. Passengers had a choice between consommé Olga (veal stock simmered with various vegetables and flavored with seafood like sturgeon or scallops) and cream of barley soup (barley simmered with vegetables, chicken stock, egg yolk, and butter).

First-class passengers got to celebrate another peaceful (but not for long) night at sea with one of the tastiest fish. For the third course, they were served poached salmon that had been glazed liberally with mousseline sauce. It is similar to hollandaise sauce except that it’s been seasoned with salt and pepper and folded with whipped heavy cream.

It was also served with fresh, water-rich cucumbers.

This is where things are really starting to look good. Ingredients are more protein-packed and expensive, and the recipes are more intricate!

For the fourth course, guests had a choice between filet mignon lili, chicken Lyonnaise, and vegetable marrow farci.

The first dish was arguably the most decadent of all—it was filet mignon topped with foie gras and truffles and glazed with a rich, red wine sauce. Chicken Lyonnaise, on the other hand, hails from the gastronomic capital of France and involves fried chicken breasts with tomato-onion gravy. Lastly, vegetable marrow farci is vegetable marrow that has been stuffed with stir-fried vegetables and topped with butter and cheese.

The fifth course is where everything was really let loose. Here, passengers had a choice between three dishes that used the finest and most expensive cuts of meat around. Their options were lamb with mint sauce, roast duckling with apple sauce, and sirloin of beef with chateau potatoes.

Then, you’ve got a side of green peas, creamed carrots, rice, boiled new potatoes, and Parmentier potatoes.

Punch romaine is a curious mix of rum, fruit juice, shaved ice, and eggs. It served as a palate cleanser for the last meal aboard the Titanic. It was meant to wash away the taste of all previous courses and get the tongue ready for the last half of dinner.

The Titanic’s recipe for punch romaine came from French chef Georges Auguste Escoffier, who pioneered alcoholic shaved ice drinks during his time. Only the best for first-class passengers, after all.

The seventh course is a delightful dish made up of roasted squab and cress.

Squab is an immature pigeon. It is a delicacy in many high-end restaurants around the world, particularly in Europe and Asia. It is very soft and tender and tastes much richer and more savory than other poultry meats like chicken or turkey. Indeed, the taste is often described as “dark meat chicken”.

Cress, on the other hand, is an herb that is very tangy in flavor. It’s notable for growing very fast, making it quite accessible.

This course is so simple yet so unbelievably tasty! It consists of boiled asparagus drizzled with a vinaigrette. The exact recipe is unknown, but the vinaigrette is presumed to have been made of Dijon mustard, vinegar, sugar, tarragon, lemon juice, salt, and pepper.

That certainly sounds like a very healthy dish we can get behind! Asparagus is known to have a ton of benefits for the entire body while being really low in calories.

The course is nearly over now, surely the Titanic chefs have nothing left in their sleeves anymore, right?

Wrong! Coming up in the ninth course is a luxurious plate of pan-seared foie gras. This is a specialty in French cuisine and consists of the liver of a duck or goose. It has been fattened to more than its average size due to force-feeding—this is important as it is said to heighten the taste of the liver. It’s described as rich and buttery and is still a high-end food in fancy restaurants today!

Celery was also served with the foie gras.

Last but certainly not least is the long-awaited dessert—or in the Titanic’s case, desserts! Peaches in chartreuse jelly are just one of the four sweet dishes served aboard the Titanic. As you can see, it’s fresh slices of peaches laid on a bed of beautiful jelly infused with Chartreuse liqueur.

Other desserts included Waldorf pudding (surmised to be vanilla pudding with apples, walnuts, and raisins), chocolate and vanilla eclairs, and French ice cream (ice cream made of eggs).

This course was the last-ever course of the last meal aboard the Titanic.