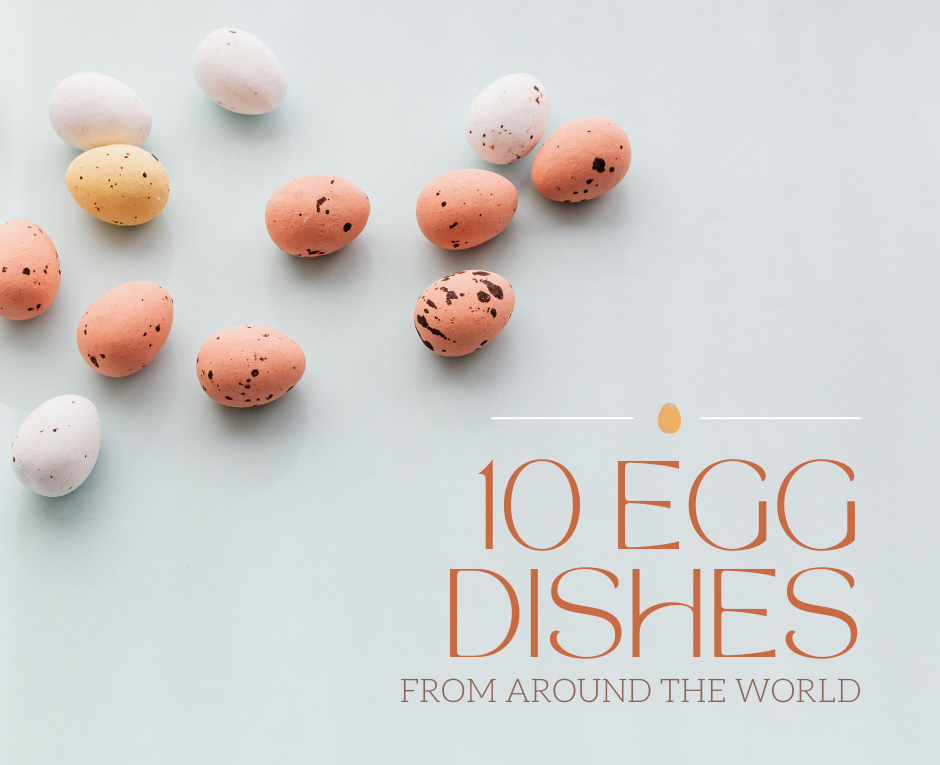 The humble egg is a very versatile food that can be used in a variety of dishes. Whether the eggs are scrambled, poached, boiled, fried, or more, eggs are a super healthy source of protein that’s very cheap and easy to make. To celebrate this superfood, we’ve compiled a list of tasty egg dishes around the world you need to try now!

Eggs benedict is a fancy breakfast dish that was popularized in New York City. It consists of toasted English muffins, runny poached eggs, and crunchy Canadian bacon all smothered with a gorgeous hollandaise sauce.

Because of its long cooking time and tricky cooking methods, eggs benedict is often ordered at restaurants rather than cooked at home. However, if you manage to make this, especially for special occasions such as Mother’s Day or a wedding anniversary, it’ll undoubtedly be a swell breakfast to wake up to for your loved ones!

While you might typically associate deviled eggs with the southern part of the United States, deviled eggs have actually been around since the Roman Empire, where they were often served as a first course!

Deviled eggs are hard-boiled eggs that have had their yolks taken out. These yolks are mixed with other ingredients like mayonnaise, mustard, herbs, and spices before being piped back into the egg white halves. Then, they’re served with more garnishes of your choosing!

In the picture below, you can see Italian deviled eggs served with prosciutto, pesto, and parmesan. Yum!

India is world-renowned for knowing how to make a curry out of anything and everything. That’s because curries are so good for you—aside from being super tasty with their irresistible blend of flavors, it’s also anti-inflammatory, anti-carcinogenic, antibacterial, antifungal, and antiviral. Wowza!

Egg curries, just like other Indian curries, will depend on where in India it comes from. So, even though they all contain eggs, they might taste vastly different. That’s good news for you and me—more egg curries for us to sample!

Menemen is a fiery dish that consists of eggs, tomatoes, onions, a ton of green and red peppers, and a ton of other herbs and spices. It’s a dish that’s commonly eaten during breakfast, which can be kind of strange since many of us don’t usually eat spicy things as the first meal of the day!

However, it’s easy to see why so many people are obsessed with menemen. With every bite, you get a ton of flavor that’s somehow spicy, savory, juicy, aromatic, and sweet all at the same time! Have it with some rice or spread atop some bread to really enjoy the experience.

Tomato egg stir-fry is a timeless classic in Chinese breakfasts. It’s almost as if a meal isn’t complete without a bowl of this hearty scrambled egg dish. Super cheap and easy to make, it is the meal of choice when you want a quick bite to eat!

It’s made by scrambling eggs and mixing them with sliced tomatoes, chives, sesame oil, and a little bit of rice wine. Serve it with a bowl of white rice and you’ve got a protein-packed dish that’s both savory and tangy!

It is typically served in individual servings in ramekins. Savory souffles are often topped with cheese and breadcrumbs while sweet souffles may have powdered sugar or creams.

Eggs and hominy corn make up the traditional Ecuadorian egg dishes that are known as mote pillo. Here, the corn is sauteed with onions, achiote, and garlic before adding milk and eggs. It’s then garnished with a ton of chives and cilantro and served with a couple of slices of queso fresco. Try it out with a hot cup of plain black coffee for a comforting breakfast!

Don’t worry, there’s no scotch involved whatsoever in scotch egg dishes! They are actually hard-boiled eggs that are covered with a thick layer of sausage and breadcrumbs before being deep-fried. And while the history behind the name is a common debate among food historians, we don’t particularly like to delve into the details—we’re just here to eat!

Scotch eggs are commonly served in picnics as a little side snack. It can be eaten by itself or dipped in sauces like ranch, hot sauce, or mustard.

Omurice is a Japanese rice dish that people of all ages would love. It’s made by frying rice with carrots, onions, and ham, and then flavoring it with butter, ketchup, soy sauce, and chicken broth. It’s then formed into a round mound and topped with a runny, custardy omelet that is just about cooked—the eggs should be cooked enough that it holds their shape but not enough to have a bite.

The best part about eating an omelet is digging that spoon for your first bite like you’re uncovering something magical!

Source: My Food and Family

Let’s end things with a sweet bang with a classic dessert from the Philippines. Leche flan is a decadent dessert made of egg yolks, sugar, vanilla, condensed milk, and evaporated milk. It’s topped with a thin layer of caramel that cuts into the richness of the dairy perfectly!

The texture is like crème caramel and caramel custard, but a little heavier and sweeter. It’s commonly prepared during celebrations like birthdays and Christmases. Trust us, you’ll always have plenty of room leftover for leche flan!