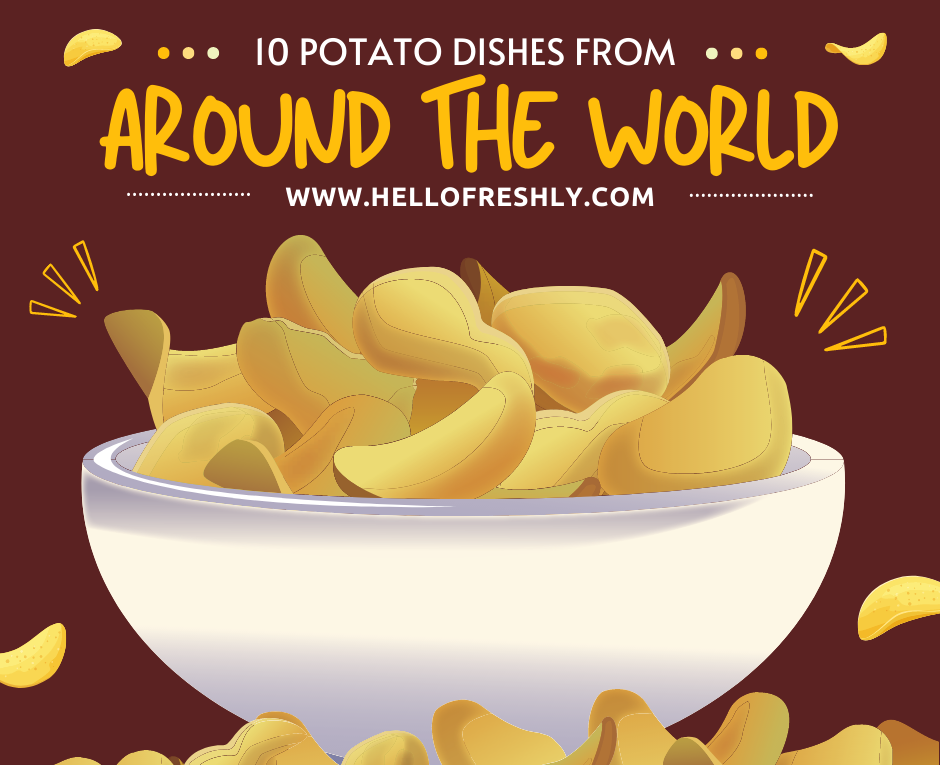 You’ll be hard-pressed to find someone who doesn’t love potatoes. There are just so many ways you can have potato dishes! Mashed, boiled, roasted, fried, steamed, and stewed are just some of the ways you can enjoy the carbohydrate-packed potato in dishes. They’re awesome sources of fiber and potassium if they’re cooked the right way, so don’t let anyone tell you that potatoes aren’t good for you!

Potatoes are very hardy and versatile and can be found in almost any international dishes, though mostly in the Western hemisphere. Let’s take a look at how people across the globe cook their potatoes.

Poutine is a dish that originated in the French-Canadian region of Quebec. It was initially met with disdain and was even used to stigmatize the people who lived there because it was perceived as a drunk man’s food. Nowadays, however, the dish has absolutely boomed in popularity, and some would even regard it as the national dish of Canada!

After all, who can resist that delectable taste of crunchy French fries smothered in gravy and topped with squeaky cheese curds?

Cottage pie is a British classic. It’s essentially a casserole—on the bottom, you have a hearty mixture of ground beef, carrots, celery, and different herbs and spices. Then, it’s topped with a thick layer of buttery mashed potatoes that positively melts in the mouth. From the description alone, you can see why almost every pub in the United Kingdom has it on its menu!

Braendende kaerlighed is translated to English as the Danish Burning Love. Nobody really knows why it’s named that way, so feel free to make your assumptions about it. Is it because the dish is traditionally served piping hot? Is it because it was cooked by the rural, poor regions of Denmark to feed their families despite their financial instabilities? Or is it just because mashed potatoes, crunchy bacon, and caramelized onion altogether are just that dang good?

Pasta and potatoes all in one? What’s not to love?

It’s hard to believe that these chewy potato tidbits are made by the simple combination of potato, flour, and egg. The recipe starts by boiling your potatoes until they’re fork-tender and mashing them until they’re completely smooth. Then, you add your flour and your eggs to form a soft dough. Divide the dough into tiny pieces before dropping them again into boiling water.

Serve with your favorite pasta sauce and a sprinkling of cheese and enjoy!

India is known for its wide array of tasty, vegetarian dishes, and saag aloo is just one of them. It’s first made by cooking spinach, onions, garlic, coriander, ginger, cumin, chili, and turmeric to form a sort of stew. Then, you finish things off by adding cubed potatoes to let them soak up the remaining juices.

Serve it on top of rice or chapati.

Bolani is a savory flatbread from Afghanistan. While it’s usually stuffed with potatoes, cilantro, and bell peppers, it can also be filled with other ingredients like pumpkin, lentils, and chives depending on your preference. It is typically dipped in a green chutney made of parsley, cilantro, garlic, vinegar, and more peppers.

As you can tell by the picture, causa rellena is a pretty insane-looking potato salad arranged into colorful layers. It has a mashed potato layer seasoned with lime juice and olive oil, and a tuna salad layer made with mayonnaise, red onion, and mashed avocado. The result is a dish that’s not only easy on the eyes but filling for the tummy.

Asian cuisines aren’t the only masters of dumplings, you know! Poland can give gyoza, xiao long bao, wontons, and shumai a run for their money with their boiled potato dumpling dishes.

Pierogi is made by forming a dough out of flour, salt, sour cream, eggs, and room-temperature butter. Once the dough is nice and formed, you cut out circular shapes that are big enough for one teaspoon of filling, which is usually cheesy mashed potatoes. Fold it over and crimp with your fingers before dropping them into salted, boiling water.

Serve with another healthy dollop of sour cream!

Everybody loves pancakes. It’s a breakfast staple that’s loved by people of all ages.

Now, what if I told you that there was such a thing as pancakes made entirely out of potatoes?

Gamja-jeon is a Korean pancake that’s made with potatoes, onions, and green chilis. To make it, you simply have to blend the potatoes until they’re nice and smooth before adding in your onions and chili. Scoop out the potato mixture into a pan with hot oil then flip it over once one side is done.

Koreans say that gamja-jeon is perfect for rainy days. The sizzling sounds of the pancake remind them of pattering rain, and the carbohydrates give them the strength to stay happy and energetic despite the gloomy weather. So, why not try it out for yourself the next time it rains?

Last but not least on this list is spicy curry potatoes from Uganda. It’s an amazing side dish that goes very well with meats and stews as it adds a kick of spice with every mouthful.

The premise of these potato dishes is simple. Sautee onions and garlic then season with tons of spices like turmeric, cayenne pepper, cinnamon, and coriander. Then, add in tomato paste and lemon juice and let it simmer for a bit before adding your potatoes. Stir to coat the potatoes evenly then cover them with water. And that’s it!