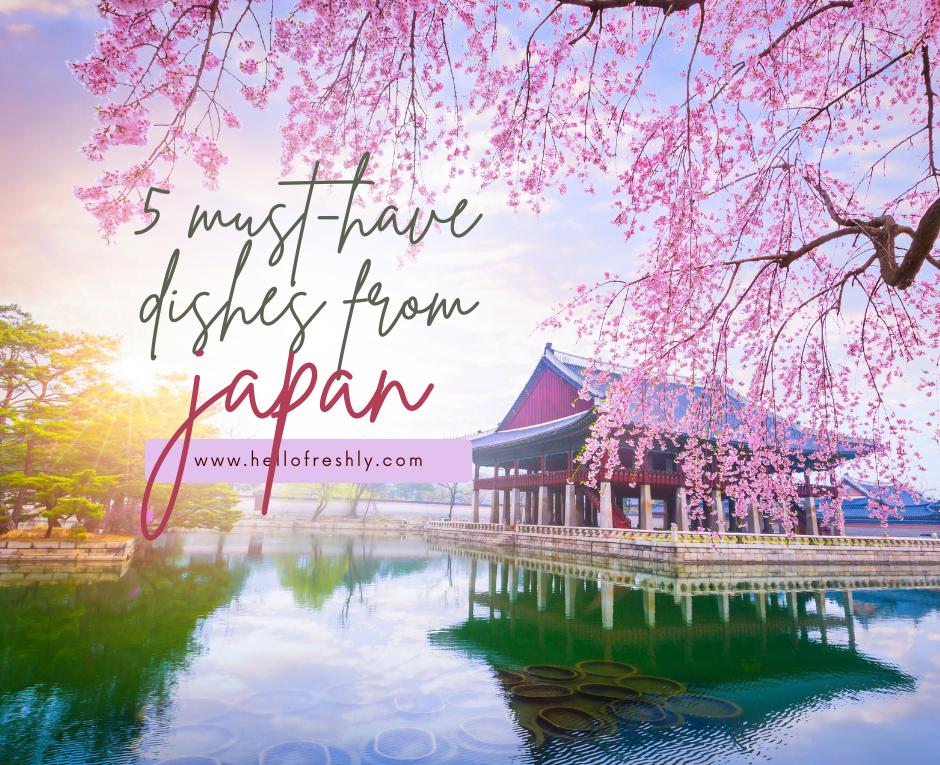 Let’s head to Japan, the land of anime, innovative technology, cherry blossoms, calligraphy, gorgeous temples, and, of course, tasty dishes! This bustling country is home to one of the most popular cuisines worldwide and for good reason. All their dishes are not only unbelievably tasty but also extremely healthy—it’s no wonder that the Japanese have some of the longest lifespans in the world!

We could go on and on about how great Japanese food is. Trust us, it took a long while for us to narrow this list to just five dishes in Japan. Let this article serve as a beautiful start to many food explorations in Japan!

Did you know that sushi used to be considered poor man’s food? It’s hard to believe that sushi could have ever been seen as that when it’s considered a luxury in many countries today!

According to historians, sushi was what poor Japanese fishermen used to eat when food was scarce. Sushi back then consisted of salted fish and fermented rice. This helped preserve the fish for longer, and the rice was usually discarded right after. Then, the Japanese started eating the rice with the fish, and then eventually vinegared rather than fermented the rice. Then, it started becoming popular among all social classes in Japan until it became synonymous with Japanese culture in general!

Sushi comes in different types, colors, and tastes these days. You have the rolls where rice and seaweed are rolled around other ingredients like cucumber, seafood, mango, avocado, and more. You also have nigiri, which is a large slice of seafood like salmon, tuna, octopus, or seabass (though you can also use grilled beef or egg) laid on a bed of rice.

Another one of many dishes that’s iconic in Japan, ramen is a super tasty and flavorful noodle dish that can be found all over Japan and in Japanese restaurants worldwide. Despite the time it takes to cook the gut-healthy broth and the number of ingredients, ramen is extremely affordable. Indeed, you can get a bowl of amazing soup, chewy noodles, soft meat, salty seaweed, yummy soft-boiled egg, and so much more without spending more than $20 in Japan!

There are many variations of ramen. Aside from the numerous toppings I’ve just listed, you can have different kinds of broth in your ramen. In the picture below, the broth is made of miso. However, you can also have soy sauce, salt, or pork bone-based broths.

When people think of curry, they usually think of Indian or Thai curries. But Japan can definitely give their curries a run for their money as they have their unique spin to it too!

Japanese curry is very homey and has been one of the best comfort dishes in Japan for decades. Instead of being full of spice and aromatics like other countries’ curries are, it focuses on the richness and sweetness of both the sauce and ingredients.

The cooking method differs a lot too. Whereas other countries combine everything in one big pot, Japanese curry is cooked separately from the rest of the ingredients. Everything from the fried meat to the potatoes and the carrots are cooked in a separate pan while the curry bubbles in another. Come serving time, the ingredients are laid down on a plate with lots of fluffy, white rice, and then the curry is ladled on top of it.

Unlike the other dishes on this list, takoyaki’s history is well-documented! A street vendor named Tomekichi Endo invented it in Osaka in 1935, when he combined beef and konjac with egg-flavored batter. Eventually, he switched the beef and konjac with the now traditional octopus and added a ton of different sauces and toppings to it. Now, you can expect your takoyaki to be topped with brown sauce (similar to Worcestershire sauce), Japanese mayonnaise, katsuobushi (fish flakes), seaweed sprinkles, and more.

Takoyaki is the quintessential street food in Japan. They can be found almost anywhere, and you can see the cooking process as it’s being made in takoyaki pans. When you get your takoyaki boat, make sure you don’t bite into it too quickly—the outside may be lukewarm, but the inside could be boiling!

Mochi is one of the many dessert dishes in Japan. It is a soft and extremely chewy rice cake that comes in a ton of fun, pastel colors. There is usually a sweet filling inside. It can be filled with almost anything from red bean paste, sliced fruits, ice cream, flavored creams, and so much more. It is lightly coated with cornstarch to prevent it from sticking to other mochi and the pan it comes in.

Because of its popularity, mochi is available year-round. Tourists love to buy boxes of them to take back home. However, for the Japanese, mochi is commonly eaten during the New Year. It is said to bring good luck and is a very important part of Japanese culture. Many villages and communities frequently gather together to make mochi together.