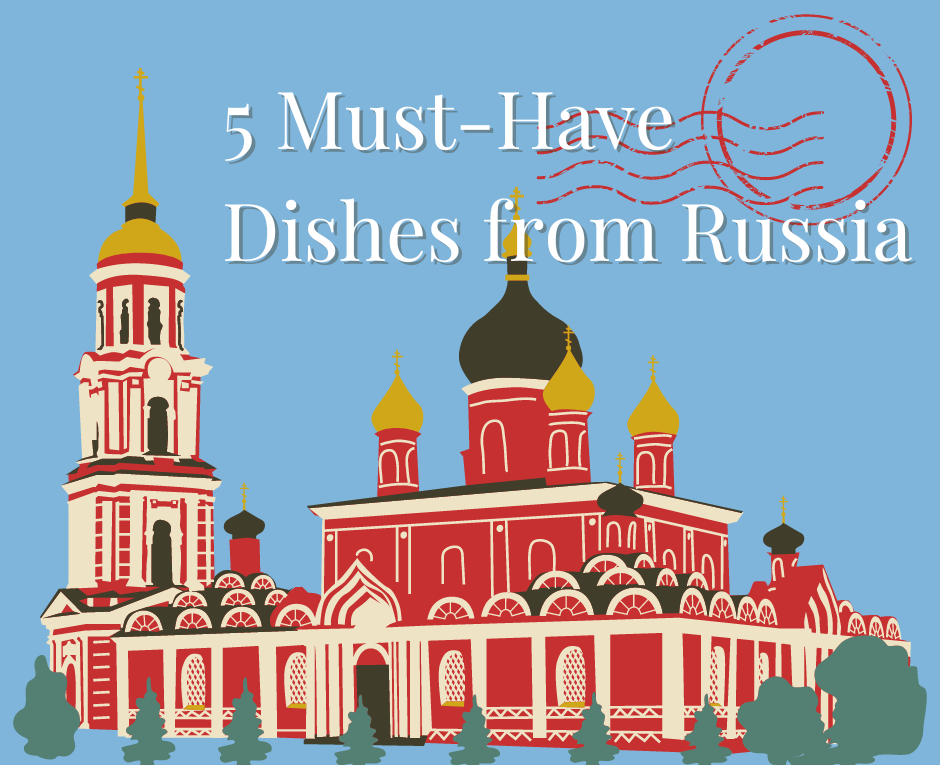 Russia is the biggest country in the world. It’s so big, in fact, that it spans two continents—it is frequently considered both a European and Asian country. It’s also big enough to have eleven time zones, and it borders sixteen countries! Isn’t that insane?

Given how big it is, it’s not surprising that its cuisine is wide and diverse. With both European and Asian cultures abound, as well as its indigenous Russian culture, you can find almost all sorts of dishes in Russia. These foods help the Russians survive extreme temperatures up there and make good use of native ingredients such as meats, grains, and vegetables.

Let’s take a look at some of the dishes Russia likes to eat regularly!

Borscht is a soup that’s a vibrant blood-red color. Don’t worry, though—it’s actually made of beets!

Here, beets are roasted in the oven before being shredded. Be careful with your hands while doing this—you’ll have red stains for days if you don’t wear gloves! Then, the shredded beets are mixed in with cabbage, onions, beans, meats, and so much more depending on your taste and preference. Serve it either hot or cold (either is good) with a generous dollop of sour cream on top for some tang.

Too busy to sit down and eat at a traditional Russian restaurant? Don’t worry about it. You can always try the pirozhki, which are little puff pastries that are filled to the brim with meat, cabbage, potatoes, and more. They’re sold as street dishes all over Russia and are perfect if you need a quick bite before heading to work or touring all over Russia!

Pirozhki also comes in sweet variants! They can be filled with fruit jams made of apple, apricot, cherry, and lemon.

With the pirozhki, you can get the best of both worlds.

Shchi is a Russian soup with an incredibly rich history. It dates back all the way to the 9th century, when cabbages were first introduced by the Roman Empire, and is still popular to this day. This popularity stems from the fact that it’s so easy to prepare—not only can you use whatever ingredients you have on hand, but you can also freeze any leftovers and just heat them whenever necessary.

It is typically served with rye bread, ensuring you’ve got a well-balanced meal. You get carbohydrates from the bread, protein from the chicken or beef, and vitamins and minerals from the various vegetables cooked in the broth.

People typically associate dumplings with East Asian countries like Mongolia, China, Japan, and South Korea. But did you know that the Russians have their own version as well? These are called the pelmeni and are made with a simple dough consisting of flour, water, eggs, and salt. Then, they are stuffed with lots of filling made of ground pork, beef, chicken, or turkey and seasoned with salt and pepper. It can be eaten as is, brushed with butter or sour cream, or cooked in some broth.

Russians consider this to be the national dish of Russia! It is delightfully chewy, and the moist, juicy filling just oozes out in the mouth.

Beef stroganoff is one of Russia’s most luxurious dishes. According to local legend, the name is attributed to the Stroganovs, a family of merchants and tradesmen that were influential during the 16th century. They were so rich, in fact, that they funded wars and conquests of the entire country!

Beef stroganoff is made of sauteed beef strips cooked in a creamy sauce made of mustard, sour cream, mushrooms, and water-rich tomatoes. It’s then poured all over some rice, noodles, or pasta to help balance the flavors.

Nowadays, beef stroganoff is popular all over the world, and variants exist between countries. In Finland, for example, they like to add diced pickles to their stroganoff, and Japan even has instant beef stroganoff sauce cubes that you just add water to.