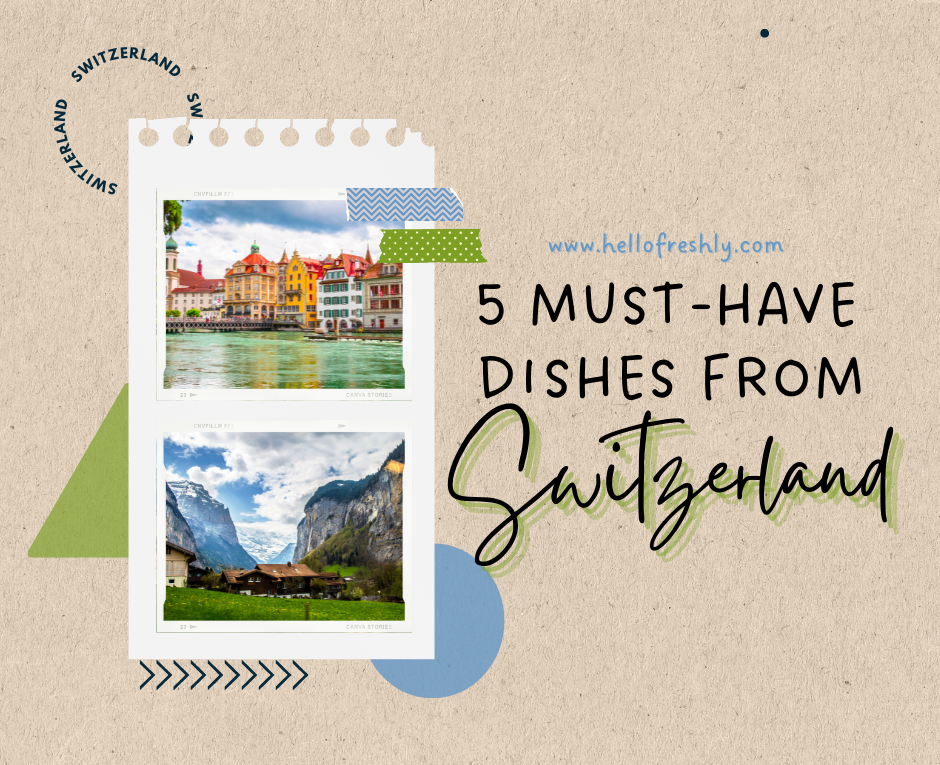 A landlocked country located in central Europe, Switzerland is surrounded by Germany, France, and Italy. This allows Switzerland to become an absolute cultural hotpot of a country with four (yes, four!) recognized national languages—German, French, Italian, and Romansh. Besides the language, you can also see the influence of all four of these cultures on Switzerland on the dishes they eat, the habits they practice, the way they handle government matters, and more.

As you’ll see later on, Switzerland is also known for its love of cheese! What makes Swiss cheese extra special is the milk they use. Alpine milk is milk sourced from the high mountains of the Swiss alps, making everything it touches extra rich and creamy. This is also the reason why Swiss chocolate is so revered around the world.

With that said, there are so many good things to talk about Switzerland that we can’t possibly include everything in one article. So, why don’t we start with the dishes that make Switzerland so desirable?

Fondue is perhaps the most iconic dishes in Switzerland. You’ve got a bowlful of cheesy goodness!

To nobody’s surprise, any recipe for fondue starts with a ton of cheese. Most people have theirs with Gruyere, Emmentaler, or Swiss cheese, but you can really use anything you’d like. You grate the cheeses and combine them in the pot with some dry white wine, cornstarch, and lemon to make the cheese more liquid and easier to dip in. Finally, season it with whatever you’d like—pepper and nutmeg are the most common choices.

You can dip almost anything with cheese. We recommend bread, potatoes, veggies, meats, seafood, and whatever else your heart desires.

Rosti is a very simple and easy-to-make dish that is often considered the national dishes of Switzerland! Depending on what region you’re from, the recipe will be different. Some just like plain potato rosti, while others like to add onions, cheese, and other goodies into theirs. It’s a very versatile dish that can be adapted to any palate, just like many other potato dishes around the world.

Plain rosti is made of thinly grated potatoes that have been thoroughly washed to remove starchiness and drained. Season liberally with salt, pepper, and other spices you’d like. Then, get a cookie cutter or muffin tin or anything else to help shape the rosti. You want it extremely packed so it won’t be falling apart on the pan. Once that’s done, add the potatoes to a pan with hot oil and cook one side before flipping to the other. Serve with a side of eggs and bacon and you’ve got a power breakfast!

This creamy, delectable dish is a delightful mix of German and Swiss cuisine. It comes from the quaint city of Zurich, where they mostly speak German. Here, thinly-sliced veal, calf kidneys, sweetbreads, and mushrooms are tossed in a gravy of white wine, cream, butter, and onions. Notoriously high in calories, this dish is perfect for wintertime as it keeps you nice and warm even with the bitter cold.

If you’re not a fan of offals, you can leave that out.

Emince de veau a la Zurichoise is typically eaten with a bed of fettuccine or roasted potatoes to cut into the richness of the gravy.

Raclette is not really a dish but more of a topping, but we thought it was way too iconic to pass up. It is essentially several servings of ooey-gooey, melted cheese that’s smothered all over your food. Whether it’s pasta, meats, potatoes, seafood, or anything else, you can never go wrong with some extra cheese!

The cheese can be melted in a pan. There are specifically-designed raclette pans for this called coupelles, and all you need to do is add cheese to the pan and let it melt over a fire. Then, slide everything off and onto your plate!

If you want something more luxurious, you can also torch half a wheel of cheese. Wait until the surface of the cheese is nice and bubbly, then scrape the melted bits off with a knife and onto your plate.

Did we mention that the Swiss love their cheese? We’ve had melted and roasted cheese so far, so why not top everything off with a nice plate of fried cheese? Commonly found in Western Switzerland, Malakoff de vinzel consists of bread rounds that have been filled to the brim with Gruyere cheese, garlic, wine, and kirsch (colorless brandy).

There are many stories about this dish’s creation. The most popular one is set in the Crimean War. Here, then king of France Napoleon III hired many Swiss mercenaries to help fight against the Russians. After a few months, they succeeded in capturing Fort Malakoff from them.

When the mercenaries returned home, they were extremely hungry and needed a filling meal to eat. They thought of frying cheese and bread and naming it after the captured fort.