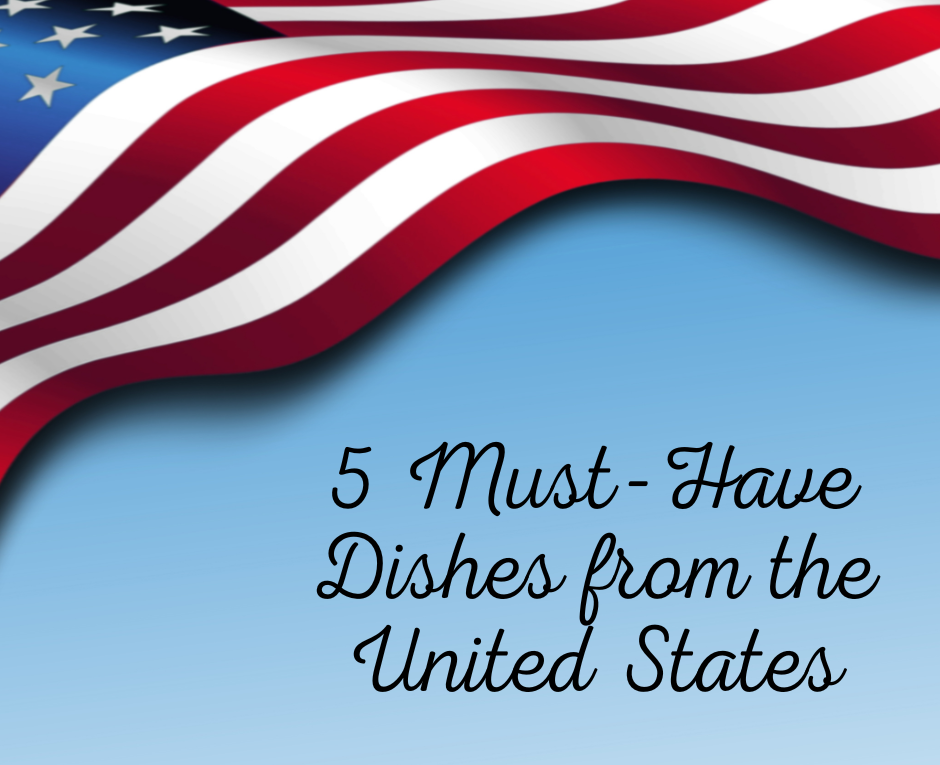 The United States of America is a transcontinental country located in North America and Oceania (Hawaii). Made up of fifty states, a federal district (Washington D.C.), five territories, nine outlying islands, and 326 Indian reservations, the United States is a melting pot of various cultures, ethnicities, genders, and so much more! And, not only is their culture diverse but so is their environment—they’ve got seven climate regions!

The hamburger is one of the foods most commonly associated with the United States along with French fries and hot dogs. That’s because it’s virtually impossible to find any American restaurant without some kind of hamburger. Heck, even fictional restaurant, The Krusty Krab, is known for their famous Krabby Patty!

This dish comes in all shapes and sizes. Beef patties are the most common, but you can also find patties made of pork, chicken, veal, turkey, elk, salmon, vegetables, and even kangaroo! You can also add in loads of condiments and add-ons like ketchup, mayonnaise, lettuce, tomatoes, onions, bacon, pickles, egg, and so much more. With the hamburger, the sky really is the limit!

Did you know there’s a reason why New York bagels are so tasty and special? According to researchers, it’s the unique composition of New York City’s water. As they pass from upstate New York and through a reservoir of tunnels in Central Park, they collect iron, calcium, and other minerals. This makes the bagels super soft and chewy. Indeed, many bagel shops outside of New York even import water from the state to make their bagels!

Lox, on the other hand, refers to salmon that can either be smoked or non-smoked. It’s served on a bed of cream cheese and topped with toppings of your choosing.

If you want Southern comfort food, then biscuits and gravy should be one of your first options. This dish is made of buttery soft biscuits and thick, creamy gravy made with sausage and drippings. It’s typically served with breakfast, ensuring you’ve got enough energy to last you throughout the day.

Biscuits and gravy first made their appearance during the American Revolutionary War from 1775 to 1783. Back then, food supplies were scarce and prices were crazy high. People had to figure out how to take cheap ingredients and turn them into dishes that were weighty on the stomach to help them last a whole day working in the plantations. The result is classic comfort food that is still enjoyed to this day.

Buffalo wings are chicken wings that have been deep-fried and coated in some savory, spicy hot sauce. They are typically served with a side of blue cheese or ranch dressing for dipping. Since its invention in the late 20th century, buffalo wings have since expanded from hot sauce to things like garlic parmesan, honey mustard, soy sauce, balsamic glaze, and more.

Buffalo wings are said to have been invented in 1964 by the Anchor Bar, in Buffalo, New York. The owners, Frank and Teresa Bellissimo, said that the idea came to them when their son came home from college with a bunch of his friends. Needing a quick and easy snack, Teresa quickly pulled out some chicken wings (which used to be unwanted chicken parts and were normally used for chicken stock), fried them, and covered them with hot sauce. The rest is history!

Brought by the Europeans between the 17th and 18th centuries, water-rich apple pie has become so ingrained in American culture that it has become almost synonymous with it. When soldiers in World War II were asked why they were heading to war, their default answer was, “for mom and apple pie!”

The dish is made with pastry dough casing and a rich, sticky apple filling. It’s served nice and hot, traditionally with a heaping scoop of vanilla ice cream or whipped cream. Some people even have it with cheddar cheese shavings, which is said to provide a nice contrast to the pie’s sweetness.