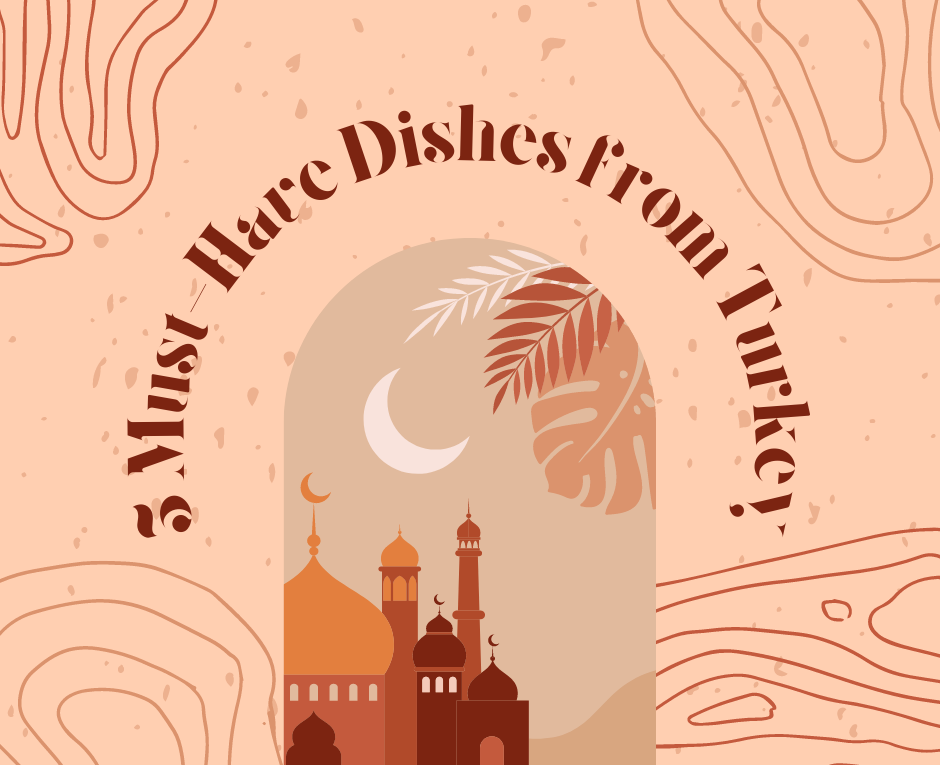 Turkey is a country located in both Europe and Western Asia. Bordered by a lot of countries like Armenia, Georgia, Iran, Syria, and Greece, Turkish cuisine is incredibly diverse and influenced by these countries and also by countries beyond. Additionally, since the country is surrounded by three seas as well (i.e., Aegean, Black, and Mediterranean Seas), dishes from Turkey feature incredibly fresh foods from both land and sea. You’ll find them put to good use in the following dishes below.

The doner kebab is the most famous of many kebab dishes in Turkey. It means ‘rotating’ in Turkish, and as you can see in the picture, it’s because the meat is slowly roasted on a vertical spit. To serve doner kebab, the chef carves a thin layer of the meat and adds it to a plate loaded with rice, bread, salad, or potatoes. It can also be put in a wrap called durum. Add some condiments to your platter to really bring everything together!

The kebab itself is typically made of beef, lamb, or chicken, and it can be roasted alongside vegetables like green bell pepper, tomatoes, and onions.

Shakshuka is an eggcellent dish that features poached eggs in a bed of tomatoes, olive oil, onions, garlic, and peppers. While its origins are contested (as the Turkish, Moroccan, Algerian, and Yemeni have all claimed this dish for their own), it’s very popular in Turkey and is commonly served at breakfast time. Its flavor profile is described as savory, salty, tangy, and heavily spiced at the same time

Mercimek kofte is the quintessential Turkish dish. They can be served at any time of day, and you’re more than welcome to eat them for breakfast, lunch, dinner, and snack time. You can also eat it hot or cold, making it the perfect meal for people who meal prep or are just too lazy to heat their food. And they’re also vegan, so you won’t feel guilty about eating too much of them!

Mercimek kofte is made of boiled, mashed red lentils and bulgur, a type of wheat. It’s then combined with onion, red pepper paste, tomato paste, and cumin. Mix everything well until it’s formable, then shape it into the shape you see below.

The pide is Turkey’s version of a pizza. It is an oval-shaped flatbread that’s filled to the brim with a mixture of cheese, sausage, spinach, eggs, and more. The crust is the true hero of the dish as it’s very fluffy, letting you scoop out tons of that flavorful filling. It’s traditionally baked in a stone oven.

Pide is well-loved all over Turkey and can be found almost anywhere from street stalls to high-end restaurants. Just like pizza, you can also choose your own toppings like all-meat pide, spinach and cheese pide, and more.

A sweet version of pide exists too. It’s made with tahini and sugar.

Known in English as Turkish delight, lokum are chewy, jelly-like Turkey dishes made of starch and sugar. Traditional lokum is often served plain with a light dusting of icing sugar or cream of tartar to prevent them from sticking with one another. Premium lokum, on the other hand, is filled with chopped dates or nuts. Common flavors of lokum include rosewater, orange, lemon, cinnamon, mint, and more.

The exact origins of lokum are unknown. Recipes for it can be found in countries all across Europe and the Middle East, so we don’t know where it came from exactly. Besides knowing that the word is derived from Arabic, there’s not much we know about its history.