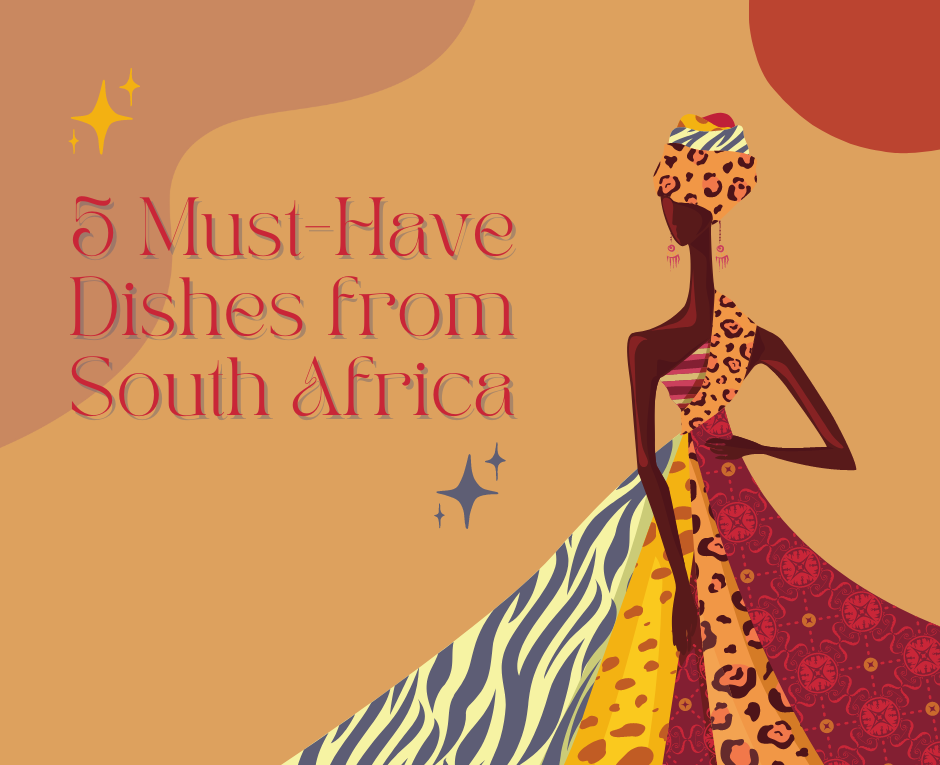 South Africa is the southernmost country in the African continent, and also one of its most culturally diverse. Through the years, it’s been inhabited by not just the African people, but also Europeans, Asians, and Pacific Islanders. Indeed, South Africa is often referred to as the ‘rainbow nation” because they are known for being a cultural hotpot!

The multicultural diversity in South Africa is reflected in the dishes they have. As you’ll see later, many of their most iconic dishes were influenced by cultures that have come and gone from their country. It is a manifestation of the country’s long, rich, and dark history.

We hope that you enjoy this article of their dishes and become inspired to visit South Africa!

Topping off the list is South Africa’s national dish—bobotie! Believed to have been introduced by Asian migrants around the 17th century, bobotie is an extremely comforting dish that’s cooked not just in restaurants, but also in many households across the country. It’s the South African version of the moussaka!

Bobotie is a casserole dish that’s made with ground or minced beef that’s been seasoned to perfection with curry spices, bay leaves, turmeric, garlic, and other herbs and spices of your liking. Then, it’s topped off with a thick, fluffy layer of scrambled eggs with milk and baked in the oven.

Despite the complexity of the ingredients, everything comes together beautifully to make a dish that’s very hearty and weighty.

Influenced by both Malay and Indian cuisine, Cape Malay curries have now become dishes uniquely South Africa! That’s because while the ingredients are similar, the cooking techniques are very different.

Cape Malay curry is made with chicken, crushed tomatoes, garlic, and lemon juice. It’s also mixed with a ton of spices such as coriander, garam masala, fennel, cumin, turmeric, black pepper, cinnamon, and cardamom. So, not only is it a super flavorful dish, but it’s also a super aromatic and fragrant dish too.

Eating Cape Malay curry with rice is an experience you will never forget!

Doesn’t the aesthetic of the dish alone look amazing? Who wouldn’t want to eat a sausage that’s tightly coiled into a giant, meaty spiral?

Boerewors is such an important part of South African culture that its production is looked into by the South African government. According to their rules and regulations, boerewors must be made of 90% beef, lamb, or pork meat, and only a maximum of 30% of the meat can be made of fat. Additionally, the meat must not contain any offal and should not be made of any leftover meats (meat pulp).

While the boerewors is traditionally grilled over charcoal or wood, it can also be roasted in the oven or fried in a skillet, as you can see below:

If every other dish on this list is a superstar, then chakalaka and pap are the sound technicians, cameramen, producers, directors, and other staff members that help to elevate them. They are mainstays in every South African meal, being served with just about anything! Heck, you could probably even have a meal with just chakalaka and pap alone—that’s how tasty they are.

Chakalaka is a vegetable dish made of carrots, peppers, peas, onions, tomatoes, beans, and more. It is often served cold and is very colorful. Pap, on the other hand, is a porridge-like substance not unlike grits. It’s made from white maize.

Don’t let the name get you worried—this dish is neither made of bunnies nor made for bunnies. Instead, it was derived from the word ‘bania’ which means ‘merchant’ in Sanskrit.

The history of bunny chow is a sad one—it was a dish meant for the slaves, beggars, or other colored people who were discriminated against in apartheid society. Because they weren’t allowed to eat in restaurants or be given utensils, cooks had to make do by giving leftover curry to them in bread bowls. Since it was cheap, it was the only food they could regularly eat for days.

Given its booming popularity around the world these days, bunny chow signifies how far humans have come since those dark days of slavery.