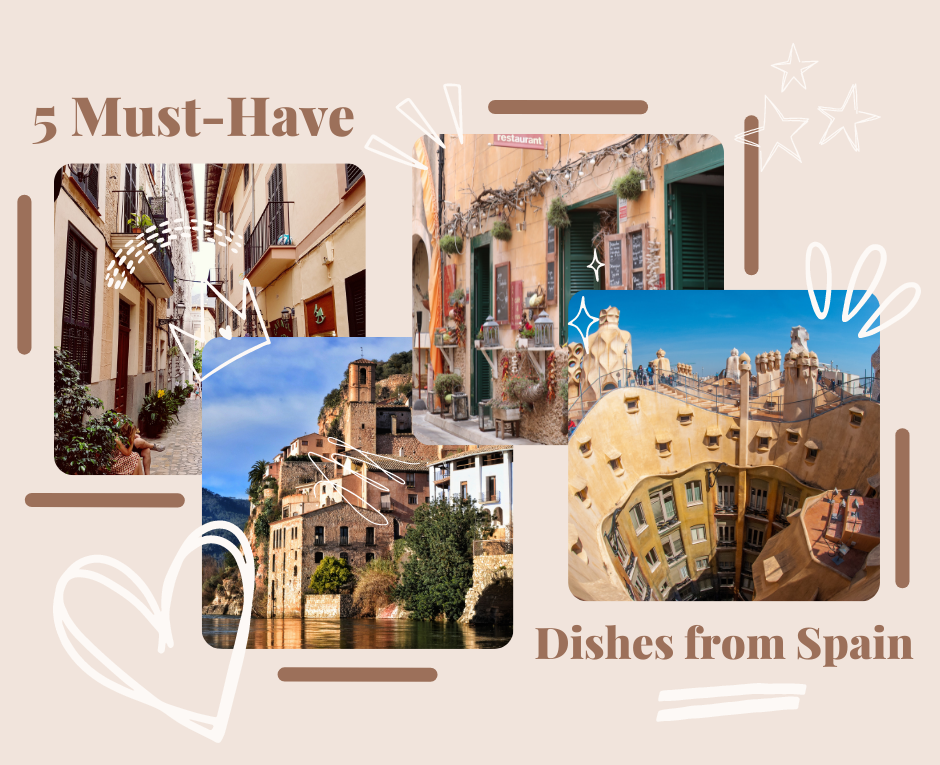 Spain is known for a lot of things—siestas, football, laid-back personalities, beaches, romanticism, and bullfighting are just some of them. However, one of the things you should never forget about Spain is just how delicious and yummy their dishes can be. Not quite as well-known as Italian or French cuisine, dishes from Spain can nonetheless give them a run for their money with their flavorful and colorful dishes.

In this article, we’ll be taking a look at the dishes that Spain is particularly known for. If you’re ever lucky enough to visit Spain, make sure to check out these foods!

Undeniably the most popular Spanish dish of all, paella is a rice dish that consists of either rabbit and chicken or seafood. The picture below is an example of seafood paella with a ton of shrimps and mussels—just how they like it.

Paella hails from the Valencia region in Spain. It’s a very colorful dish mainly because of the saffron in the rice that gives it its distinctive yellow-orange color. It should also have a thick, crunchy crust of burnt rice at the bottom called the socarrat—a nice treat to cap off the very tasty meal.

While France has their French onion soup and Italy has its minestrone, Spain has gazpacho. This is a soup often served cold and is made with raw vegetables, including tomatoes that give it its bright red color. It is served cold because it is meant to be enjoyed as a summer refreshment, helping you cool down on a hot day.

It is typically served with bread to dip with and additional chopped vegetables such as cucumbers, tomatoes, bell peppers, olive oil, and more. Modern gazpacho even uses innovative ingredients such as strawberries, watermelon, and grapes!

If you’re looking for delightfully salty meat that melts in your mouth, then jamon is the dish for you. This is made of a whole pork leg that is traditionally salted and dried for several months—this helped the Spaniards back then get through the winter months with barely any spoilage. The meat typically comes from white pigs of the mountains, though more expensive cuts can come from black pigs instead.

Jamon is meant to be eaten before meals as a starter. It gets the hunger going in your body, getting you ready for the upcoming meal. Cut a thin slice of the jamon and eat it with some bread.

Who doesn’t love churros? This simple yet tasty dessert consists of dough that’s been piped up nice and long. Then, it’s deep-fried and covered with sugar while still piping hot. It’s typically dipped in melted chocolate sauce, but you can also try it out with dulce de leche, white chocolate, caramel, peanut butter, or fruit creams.

It’s a staple in Spain and many countries all over the world, including Mexico, Argentina, Bolivia, Chile, Venezuela, and the Philippines. You might even find it at your local fair!

No, we don’t mean the flatbread that makes up tacos and quesadillas! Tortillas in Spain refer to potato omelets that can sometimes include onion. The name is said to be derived from torta meaning pancake, referring to the flat, circular shape that tortilla often is.

Tortillas are so beloved in Spain that Tortilla Day is celebrated in southern and western Spain every year. Here, they spend the day out with their family and friends, eating tortillas and playing fun games.